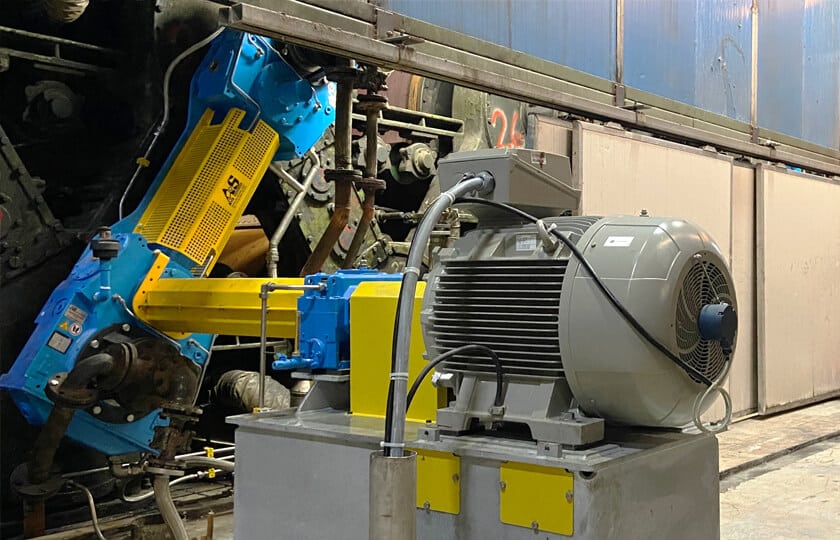 Posted at 10:20h in Uncategorized by Manuel Froncek

Situation before the rebuild 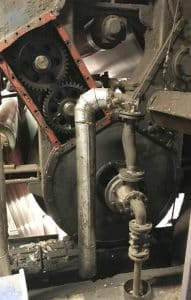 Before the rebuild, the pre-dryer groups of the PM 2 were driven by a closed gearbox. (see Fig. 1) Each individual dryer group was driven by one DC motor. The power of the motor was transferred via a shaft into the closed gearbox, where it was then transmitted via a large number of intermediate gears to the drive wheels of the drying cylinders. With this type of drive, all the gears inside the closed gearbox were in a form-fit connection. This leads a number of disadvantages.

On the one hand, considerable stress can occur within the system. This occurs, among other things, when the gears expand to different degrees due to heat impact. In addition, the circumferential speed of the individual cylinders cannot be influenced due to different cylinder diameters, which leads to tensions in the paper web.

In addition, the maintenance costs were very high. Replacing defective intermediate gears was extremely time-consuming and the stock of spare parts for various gears was high. 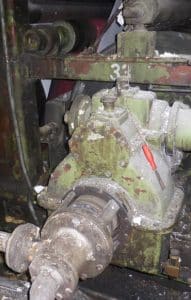 Last but not least, this drive system has poor efficiency due to a large number of gears meshes within the closed gearbox as well as the total mass of all mechanical drive components (drive gears, intermediate gears) that has to be driven.

In the PM 2 post drying group so-called Tek gear units were used. Like the closed gearbox, these slip-on gearboxes are characterized by a central DC motor that feeds the power into the group via a shaft. Different to the solid closed gearbox of the pre-dryer group, the power of the Tek gearbox is transmitted to the cylinders by many intermediate gearboxes and slip-on gearboxes on the cylinder journal. This system also has disadvantages, such as stress in the system due to the form-fit connection, the increased spare parts requirement and poor efficiency due to the large number of intermediate gearboxes and slip-on gearboxes.

Konya commissioned the German machine builder AS Drives & Services GmbH (AS Drives) to rebuild the drives-side.

In a first step, AS Drives developed a new drive concept within the scope of engineering. As a drive solution, AS Drives proposed the self-developed gearbox system FlexoGear®. This type of drive consists of a slip-on gearbox which is plugged onto the journal of a dryer cylinder. Two of these gearboxes are sufficient to drive an entire dryer group with a maximum of eight cylinders. In the Konya case, each gearbox drives the last cylinder of the top or bottom felt. The remaining free cylinders of the dryer group are then dragged along by the respective top or bottom felt. This eliminates stress, because there is no form-fit connection any longer. 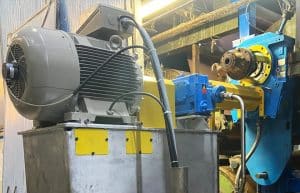 Two FlexoGear® can be coupled to a Duo-Unit. (see title) In ech unit, both FlexoGear® can be coupled by the use of a shaft so that one motor can drive two FlexoGear® simultaneously. Torques that occur are absorbed by the use of a patented special torque support. This torque support is designed to prevent stress within the system by using a three-dimensional motion compensation. It is also mounted directly between two gear units. The FlexoGear® units support each other. In the Duo connection there is therefore no need to connect the torque support to the machine frame.

For the pre dryer section three of these duo-units were planned.

One further FlexoGear® gear was execute in a single version, with a special torque support. (see Fig. 3)

On the cromium cylinders after the Size Pres, two more FlexoGear® in single version are then used. The two individually driven FlexoGear® on the cooling cylinders are coupled by only one torque support. (See Fig. 4)

One more Duo systems is also used for the post-dryer group.

During the engineering, AS Drives examined how the old drive could be decommissioned and how a new drive could be connected. For the connection to the cylinder journal, AS Drives designed a journal extension and an adapter. For the decommissioning of the old drive, the intermediate gears inside the closed gearbox had to be removed. The housing of the closed gearbox itself remained as a supporting element of the machine frame.

AS Drives also checked the wrap angle of the felt around the drive cylinders to see if it was sufficient for dragging the free cylinders. 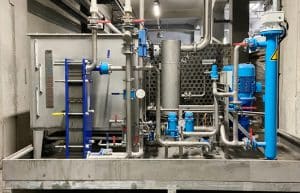 To supply the FlexoGear® gearboxes and the pre-gearboxes with the necessary lubricating oil, AS Drives supplied a Lubriflex® lubrication system. This system treats the used oil that flows back from the gearboxes in such a way that it degasses, filters and tempers it. The Lubriflex® also got an optimized degassing design inside of the tank. As a result, the Lubriflex® requires just half the tank size of conventional lubrication systems. With the size of the lubrication system installed here, this is a saving of 1500 liters of oil.

For the allocation of the oil from the lubrication system to the gearbox, AS Drives supplied the intelligent flow meters FlexoFlow®. These allocate the oil fully automatically during operation. Independent of the pressure, temperature and viscosity of the oil, a once preset setpoint is continuously adjusted and monitored.

Konya took over the rebuild of the entire drive itself. Konya also aligned all cylinders during the rebuild took place. If the speed of the old machine will be increased, the alignment of the drying cylinder is a very important parameter for the good condition of the Paper machine.

In this step, Konya also replaced the old DC motors with new AC asynchronous motors. The removal of the intermediate gears of the closed gearbox as well as the disassembly of the Tek gearboxes was also carried out by Konya. Also, Konya took over the installation of all piping for the supply of the new FlexoGear® gearboxes and pre-gearboxes with the necessary lubrication oil. For the installation of the new drive, AS Drives provided the FlexoGear® gearboxes, the pre-gearboxes, couplings, journal extensions, adapters as well as all drawings which were necessary for the steel constructions (bracket etc). The rebuild phase on site was accompanied by 2 supervisors from AS Drives.

The situation after the rebuild

We are very satisfied with the new drive technology. Maintenance expenses have been drastically reduced. We also note an improvement in the tendency to reduce web breaks due to significantly reduced stresses in the system. We get also rid of the leakage at the closed gearbox.

We are also highly satisfied with the new lubrication technology. All parameters, such as oil flow or oil temperature, can be monitored and even controlled from the control room. Oil distribution to the individual lubrication points is now controlled very precisely and fully automatically.

After the rebuild of the dryer groups and the cooling cylinders, we have achieved a large part of our project goal of increasing speed. We now have to debottleneck further sections in further steps in order to be able to advance the performance increase of the entire drive.